The known advantage with implicit simulations is that the solution is unconditionally stable allowing larger values of timestep. In implicit static simulations (IMASS=0 in *CONTROL_IMPLICIT_DYNAMICS), the simulation time has no real significance but is rather an indication of the applied load magnitude. For example if we have a simulation where a load is applied linearly such that it reaches 100% of its magnitude at the termination time of 100seconds and the current simulation time is 20seconds using an arbitrary timestep of 1second, then we can interpret that our load (assuming linear scale) is 20% of its maximum load. In the case of implicit dynamic simulations (IMASS=1) time takes real meaning and unlike explicit solution, the timestep is unconditionally stable and thus allows us to choose a large timestep.

By default, LS-DYNA uses a constant implicit timestep, specified using DT0 in *CONTROL_IMPLICIT_GENERAL , for the entire duration of the simulation time. The magnitude of DT0 is usually choose as a fraction of the total simulation time and is entirely dependent on the nonlinearity of the problem. Using a constant timestep is very conservative in nature since irrespective of the number of iterations each timestep was required to converge, the timestep is unchanged and this may result in large number of expensive iterations. For a problem whose non-linearity is unknown, this is actually not a bad thing since smaller timesteps pose lesser nonlinearity issues and may be easier to converge. However, once the user becomes familiar with a problem, careful usage of automatic implicit timestep control in LS-DYNA is a very good alternative to reduce the number of iterations thereby reducing the simulation time. 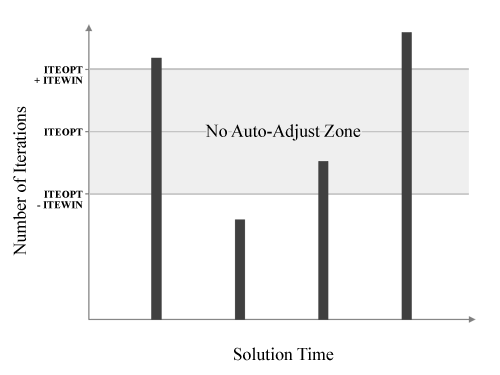 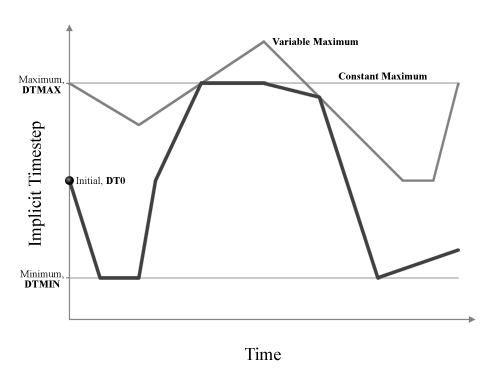 A Few Important Notes on Using Automatic Timestep Control
As mentioned above, the auto timestepping is purely based on the number of iterations that was taken at the current timestep. It does not understand any issues related to contact-impact interactions. For cleaner contact interaction, a smaller timestep is preferable which when violated, results in contact breakdown or instability due to the application of large penalty forces. To aid better contact treatment while maximizing the advantages of auto-timestepping feature, the value of DTMAX must be carefully chosen such that large values do not cause contact difficulties. In the case of contact breakdown, LS-DYNA may still converge and yield a solution but with interpenetration which should be avoided. Unless a user becomes familiar with a problem, a constant timestep is a safer method and as the experience with the problem increases, a good auto time stepping can significantly reduce simulation time while maintaining the accuracy of the solution.